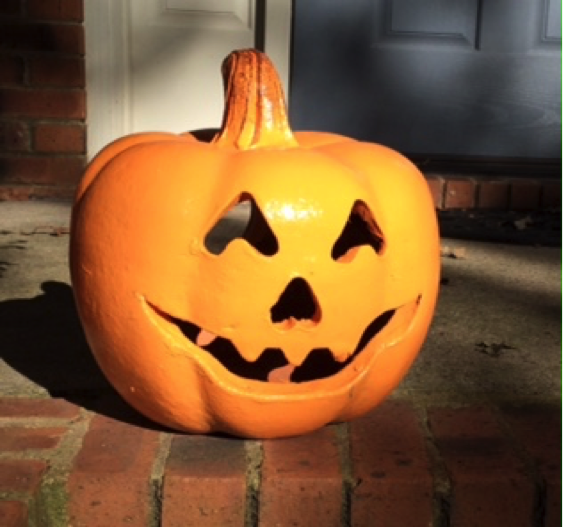 This weekend for the first time, I bought an “artificial” jack-o-lantern made of clay to display on Halloween. With our children grown and gone from home, we had no need to carve a real pumpkin or make our annual mess. Yet, I was reminded of the important role those former pumpkins had played in my life.

Every fall my children and I engaged in an annual tradition. Just before Halloween, we carved our jack o’ lantern together. For twenty years it had always been the same. We chose a pumpkin. We drew a face. We cleaned out the “insides”. We carved the face. We admired the work we had done together. It was a rite of passage that my father passed to me years ago. It was a rite of passage for my children as well. But, it was also much more.

When the kids were very young most of the responsibility fell to me. But as they got older, I encouraged them to participate. By the time they were two or three, I let them put their little hands down in the open top and pull out handfuls of the “yucky” orange stuff. For one child the gooey ooze in his hand was pure pleasure. For the other, it was a price to pay for participating in the fun. By age four, I asked my kids to draw pictures of the way they wanted the face to look. They got some paper, a crayon, and drew a picture.

This was when the undertaking started to turn to something more than just a carving exercise. Early on, the drawings were not very clear. That is to say, sometimes I did not know what they had drawn. In most cases it didn’t look just like what the “artist” had in mind. At that age, they could not yet transfer the ideas in their heads on to a piece of paper with a crayon. So, I needed an explanation. That led to a conversation, which I eventually found to be the real prize in this annual ritual.

The conversation went something like this. Tell me about your picture. Is the face supposed to look like someone? Yes? Ahh… now that you say it, I can see that it looks like Mickey Mouse [or a Power Ranger or whoever was in my partner’s mind.] Now that I see, maybe I could work with it. Tell me more. Are the eyes round? Is the nose supposed to be big? Do the ears stick out?

All along I would reassure them by saying I just wanted to make certain that I was getting it the way they wanted. Eventually the description came out as clearly as possible and the challenge began for me. I had to use the knife to make the pumpkin look as much like the drawing as I could. Most of the time I came close, and with a little bit of sympathy, my children appreciated my efforts, no matter how it really looked. While some years were better than others, we were never too embarrassed to display the pumpkin on the front porch Halloween evening.

Somewhere along the way, I began to realize that just doing the project together was as important as the final product. As the kids got older, the challenge became more difficult. Their artistic skills improved and their pictures actually began to look like what they were describing to me. What’s more, the sketches became more sophisticated. No longer were they simply two triangle eyes, a round nose and a moon shaped smile. They began to have details including eyeballs and eyebrows; and noses of specific shapes; and mouths full of teeth. The faces had expressions.

The good news was that the opportunity for our conversation continued. Tell me more about what you have drawn. Why did you pick those eyes and that nose? Why did you pick that person or character? These questions became the part of our annual conversation. A give and take between two generations. When we were lucky, we connected and two minds saw the same thing. Then, we transformed the idea to “art”. A similar conversation occurred every year. A child and a parent learning about each other through conversation. Without knowing it, we were building our relationships and growing closer each time.

I learned the most significant lesson of all when my daughter was almost thirteen. That year, I thought this annual collaboration may have passed us by. Like the Easter Bunny and Santa Claus, I thought the pumpkin carving had left the radar screen and been replaced by other more grown up interests. But, to my delight, she asked if we could repeat our annual ritual as always.

Can We Put Braces On Him?

Like so many times before, she accepted her responsibility of sketching the jack-o-lantern’s face on a piece of notebook paper. She handed it to me so that I could transfer the concept unto the front of the pumpkin. But, as I drew, she asked a thoughtful question, “This year, could we put braces on the pumpkin’s teeth?” Always up for a new challenge, I said, ”Sure”. And just like so many other devoted daddies, I agreed to do something without the slightest idea of how I might get it accomplished. But, my little girl, the one on the verge of growing up was asking, so somehow, I knew I could figure it out.

As it turned out, the challenge was not so difficult. First, we simply made the teeth look crooked enough to deserve braces. Then, searching in the garage, we found a spool of wire that I cut and bent into the shapes we needed. The wire ends poked easily into the soft pumpkin shell and held securely. We found some “stick on” blue dots in my wife’s Sunday school craft stuff, and when we placed them strategically on the wires, they looked very much like the blue rubber bands that hold young girls’ braces in place. As we admired the pumpkin with the orthodontic smile, I thought to myself, “Mission accomplished”. Then I was reminded the prize was never in the finished jack-o-lantern, but rather in the journey getting there. As we stood side by side at the kitchen counter that afternoon, we renewed our annual conversation. This time the conversation was focused on the unique twist we had added to the teeth of our pumpkin. My daughter began, “Are the wires funny looking? Did they make the pumpkin look weird or different? If the wires stayed on, do you think the pumpkin’s crooked teeth would straighten … and become beautiful?”

Calmly, I answered each question one by one. No, I don’t think the wires look funny. No, I do not think the braces make the pumpkin look weird or different. Yes, I believe if the braces stayed on long enough the pumpkin would have a beautiful smile.

Then, she continued. “There are kids in my class who have braces. We do not think they look funny or different. We all know that when their braces finally come off, they will have beautiful smiles.” I nodded reassuringly, “Yes, I know.”

Then she looked at me and smiled. For the first time that afternoon, the sun glistened off the silver braces in her own mouth and the light shone brightly on the blue rubber bands strategically placed on them. I smiled back. No more words were needed. The point was perfectly clear.

This final Halloween exchange contained real questions, asked through the crooked teeth of a pumpkin. What my daughter really asked, implied but unspoken was, “Do my braces make me look weird or different? Do you think they will make my teeth straight? Will I have a beautiful smile some day?” And, the most important question of all, “Do you still love me the way I am?”

As we stood there, she recited silently the answers we both already knew. “I am OK with the way I look. No one laughs at me. Many of the other girls have braces, too. We know that they will make our smiles look better when they come off.” And then, “I know now that you think so, too.”

These were questions she wanted to ask. These were things she had needed to say to her Dad. But, until now, she did know how to start that conversation. She didn’t know how to get her daddy’s reaction. How could she approach those feelings? How could she measure if her Daddy still felt as she did, that she was beautiful, even with metal and rubber bands in her mouth?

Our annual tradition provided the time for us to talk. Our old friend, the pumpkin became the focus of our attention and allowed us to get around the awkwardness. Together we shared what needed to be shared. We finished our work. We stood back together to admire the jack-o-lantern as we always had. Did it look like the picture she had drawn? Yes. Were we happy with the result? Yes. Was it beautiful with braces and blue rubber bands? Yes, indeed.