Courage To Be Uncomfortable

In this season of “comfort and joy”, I wonder how discomfort can also bring joy. If one definition of insanity is doing the same thing over and over and expecting a different result; then, I wonder if sanity must be doing things differently in order to achieve a desired result.

No Pain, No Gain 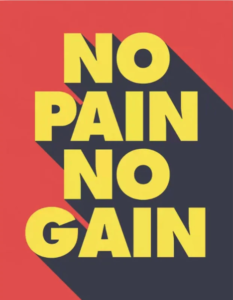 In our high school locker room there was a sign saying “no pain, no gain.” Some think that saying is silly, but I still believe. At the end of my daily workout, if I am not tired, if I don’t hurt a little, if I am not a bit “uncomfortable”; I know I haven’t really accomplished anything. Those days when I push, when I do something differently, I improve. When I crawl into my bed at night, if I am tired, that usually means I have had a  productive and meaningful day. That discomfort has taken me to a place of joyfulness. “No pain, no gain.”

When I coached young players they frequently made mistakes in practice. On the basketball court, boys often made the wrong pass, moved to the wrong position or ran the wrong play. Sometimes it was because they had not listened to instructions, sometimes they did not understand, sometimes they just decided to do it their way. To change their behavior, I tried not to criticize; rather I corrected, then encouraged. However, I wanted those players to feel a bit uncomfortable. That feeling of uneasiness caused them to pay attention, listen, work harder and avoid the same mistake next time. The discomfort lasted a short while, then went away. But it worked to make them better players.

Looking back, the times when I enhanced my life were most often the times when I stepped out of my comfort zone. I took some risk. I tried something new. I looked with a new perspective. I worked longer or harder than I thought I could. Sometimes uneasy at first, the results were almost always worth it.

At some point I realized that discomfort is part of being a father, too. Coaching a soccer team when I had never played the game. Teaching scripture lessons to bright and inquisitive teenagers in Sunday school. Going camping, kayaking, and hiking while depending on other more experienced dads to show me the ropes. Trying to make sense of a Physics textbook so I could help my daughter with her homework. All those situations made me uncomfortable at first. Delight emerged as players learned to play the game, teenagers expressed their faith and my daughter passed her exams.

Dads Must Be Courageous
From the beginning, we recognized that a character trait of Be There Dads is courage. Courage to be the only man to volunteer for a PTA 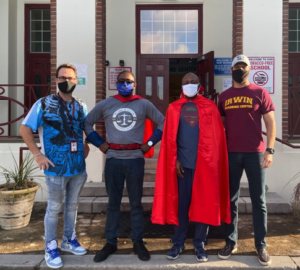 committee. Courage to read a book in front of a second grade class – then answer questions. Courage to wear a silly costume at a Halloween party. Courage to wear a colorful tee shirt and direct cars in a parking lot. Courage to leave work early to coach a game. Courage that shows itself when a man is willing to assume and stand at his post, when others might not.

Today, more than ever dads need to step out of their comfort zones. The world is an unnerving place for children and young people. They need dads to walk alongside and guide them with a steady hand. They need to see dads lead as coaches. They need to know dads can do homework. They need the feeling of security when a dad is directing carpool line. They need the feeling of self-worth when their dad has made sitting in the stands at their game or applauding at their concert his first priority. Kids don’t want dads to be perfect, they just want us to be present.

Especially now, dads need to have the courage to talk with their children. To listen to their concerns and their dreams. To help them struggle with the questions of life. To talk about the difficult subjects of the day… violence, racism, sexual relations, and civility. To talk about maintaining those values of loyalty, responsibility, hard work, honesty, and faith. While our acts of courage may make us uncomfortable, they will likely bring comfort to our children. To paraphrase Maya Angelo: Your kids will forget what you said, your kids will forget what you did, but your kids will remember how you made them feel.

Eleanor Roosevelt encouraged us to “Do one thing that scares you every day.” In the coming year, I hope I can find the courage to be uncomfortable more often. I feel confident the joy will follow.