Everyday each of us is confronted with decisions. Opportunities to move forward or not. Some decisions are large, some are small. Do my exercises or not? Practice my piano lesson or not? Salad or French fries with my burger? Wear a mask or not? Reach out to someone new or not? Love my neighbor? Push the rock?  Each decision changes our life, as it contributes to defining the path we will follow and the person we want to become. As Be There Dads, we can help our children make those decisions.

As we prepare to introduce more new dads to the Be There Dad concept, I want to re-visit an excerpt from my book that addresses decision making by defining reality.

My son was in the ninth grade. One evening I was helping him with his Algebra homework. The lesson for the evening was the Quadratic Formula. You remember it from high school, don’t you? [insert sarcasm] “x equals negative b plus or minus the square root of b squared minus 4ac all over 2a”

I sat beside him at his study desk and tried to help him understand. After what seemed like an eternity – probably an hour – the stuff just wasn’t sinking in. He struggled to understand as we re-read the textbook and we re-worked sample problems. Finally, the frustration and weariness came to the surface. He pushed back in his chair looked at me and said in disgust, “Why do we need to learn this thing, anyway?”
As frustrated and weary as he was, my initial reaction was close to his. I wanted to agree, “Yeah, why should we waste our time doing this funky formula? We are never going to use it.”  Then, we could quit for the night and watch the game. But, I took a breath and reminded myself that I was the parent here. He had an assignment and it was my responsibility to make sure he accomplished it.

I had mixed feelings. He was right. He would never again use this blasted formula. Since I learned the same equation in high school over thirty years before, there has never been an occasion for me to use it. So why go through the misery and headaches? Why should he learn the Quadratic Formula?

I considered my options for answering his question. I considered putting it in terms of how doing complex math is good for the thinking process and that developing problem solving skills would enhance his ability to solve the problems in other areas of study where he had more interest. I even considered suggesting that eventually he might change his mind and pursue a career in a field that required the use of such mathematical concepts. If all that did not work, I wondered if I could put it in terms of how it might change the world, increase the opportunity for world peace or some other such nonsense. [We all know how those conversations get out of hand when everyone is tired and frustrated.]

This was one of the first times I truly thought about my role as a Be There Dad. I actually considered his perspective and thought about how he would receive my answer. I paused before I spoke, then, I decided to take a straightforward approach. I decided to help him define his own reality and show him how learning the formula could lead him to his own personal goals. Maybe that would motivate him.

My son looked at me, surprised that I had taken such a direct approach.  There was no, “because it is good for you”; no, “because your teacher said to”; no “do it, because I am your father”. Just cold hard facts. Now the decision was up to him. The question had now been transformed from, “do I want to learn this formula?” to “do I want to go to college?”There was no getting around it. If he couldn’t take this step, he couldn’t finish the race. 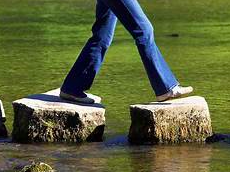 A minute passed. I could see he was still as frustrated and tired. But now, he understood. This was a stepping stone on his path. He shouldn’t let this one end his journey. He just needed to suck it up and take the step. So, he said, “OK”.  But then, he added, “Tell me, honestly, when I am really ever going to use this formula again?”  With a wry grin, I said, “When you are helping your own son study for his Algebra I test”. We both laughed.

We went back to studying. With the pressure relieved and the true goal in mind, somehow the next hour seemed to go more smoothly. We were successful in helping him learn enough to score respectably on the test the next day. He eventually passed that math course and the next one. He graduated from high school and went on to graduate from a prestigious university with honors. He obtained a Master’s degree and went on to law school. As far as I know, he has still not put the Quadratic Formula to practical use.

A Be There Dad Moment

As an aspiring Be There Dad I learned a lesson that has served me well. At some point, we need to have the courage to be honest with our children. By a certain age, they can see through the sugar coating, and they want some real answers. When they are ready, we have to help them define their own reality. To do this, we must understand who our children are; their unique set of gifts; and where they want to go in life. Our understanding will help us guide them.  their own journeys more effectively.

I understood that my son had little aptitude and no interest for mathematics; and that no matter how long we studied that evening, that gift would never come to him.  But I knew his dream was to go to college and beyond. Understanding my son helped me define his reality for himself. He learned a mathematical formula so he could take a step on his journey. It was a step he would never take again. But he took away a formula about life that he could use again and again.