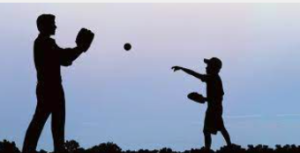 Some fifty years ago on a beautiful Pennsylvania summer evening, my dad and I were in the front yard of our tiny house having a catch. Back and forth. Back and forth. Throw and catch. For variety, my dad would slip in a ground ball that I would scoop up and fire back to him in time to get the imaginary runner headed for first base. Then, a pop up to settle under and get the second out of the inning. Both of us sharing the “play by play” commentary as we pretended to be in the middle of a hotly contested game. To paraphrase the famous line from Field of Dreams, “Was this Heaven?” “No, but it was very close.”

Over the years of his life, I spent many, many hours with my dad. We went deep sea fishing in the Gulf of Mexico. We golfed at Inverness. We visited the Smithsonian in Washington, DC. The Army-Navy game. Baseball games in Detroit, Cincinnati and Philadelphia. The Indianapolis 500 and much more. But I never enjoyed any of those times more than playing catch with him on Blue Spruce Court.

Fresh air. Exercise. But mostly, a time with my dad. Somehow sharing the ball as it went between us created a connection that other activities could not. The pop as the ball landed securely in the mitt, the turn and throw back. Another pop. A shared experience like few others.

Along with the ball, chatter sailed back and forth through the summer air.  Like the game, our conversation was “just between us.” My Dad praised his ten-year-old third baseman with “You played a good game last night. Nice play on the hot grounder in the second inning. Your arm is getting stronger.” Then, gracefully he moved on to questions like: “How’s your grades?” and “Did you finish your book report?” Time just for me.      I knew that my dad cared.

In a big league stadium or a front yard, baseball is something to do while we talk with each other. Like playing catch, we toss our words and feelings back and forth. Your favorite team. My favorite team. Your favorite player. My favorite player. Your favorite memory. And mine.  Baseball makes time for exchanges  between dads and kids. Reciting a player’s statistics. Anticipation of the next hit.  Wondering aloud what to do with a ground ball to third. Then, there is the history. Remembering the game last week, the hitter’s last time at bat or the 2016 World Series. Talking about the players of today and the inevitable comparisons to those of the past. Even today many conversations include the names Babe Ruth, DiMaggio, Mantle, Mays and Hank Aaron. Baseball connects us.

In his PBS documentary, Ken Burns reminds us of the constancy of baseball. While our society has changed around it and the game has evolved on its own, the core of baseball has remained the same. There are values that can be passed down from generation to generation. From grandpa to father to son. The necessity of hard work and discipline. Knowing and following the rules. Sportsmanship and respecting the game. Excelling individually while supporting your teammates. Loyalty of fans and players. These are lessons for kids’ backpacks. 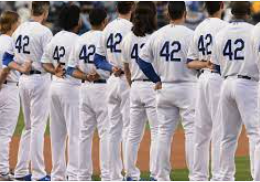 The game brings folks together. Fans come from all walks of life. A logoed shirt and your lucky cap, make you one of the many faithful. Beers and brats and peanuts in the shell are shared by folks from everywhere. Look at the players. Baseball presents diversity of size, shape, color, religion and nationality. Major League Baseball celebrates a day each year when all players wear number 42 in honor of Jackie Robinson. Where else does that happen? There is opportunity for anyone to play. Kindergartners hitting from a tee; grandpas playing catch in the backyard; or a family game of wiffle ball at the beach. Moments to connect.

Baseball is far from perfect. It has had bad times as well as good times. There have been questionable actors and scandals along the way. Others played and lived with impeccable character. Teams have folded in the race to the pennant. Players have hitting slumps, but no-hitters still come along. Maybe that’s why I like it. The game rewards the excellence of hitting a walk off homer in the ninth; yet reveals the vulnerability of being fooled by a curve ball in the fifth. It exposes us all as human and gives us opportunity to talk about our shared experience. 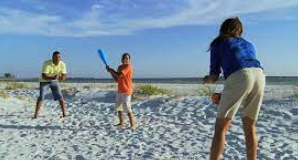 I wonder if it is time for us all to have a good game of catch. To share a piece of the game with those we love. A chance to talk to each other. Time for us to re-connect. To re-gain a feeling of harmony. To rejuvenate the belief that we can make it to the playoffs, if we all just concentrate on hitting the ball up the middle and getting on base. If we rely on our team mate to move us to second with a bunt; then race for home on a liner to right field. Score a run. Move along.

As school dismisses, summer comes upon us, and we prepare for what’s next; maybe dads can use baseball as a way to spend time with our kids. To toss a ball. To make that connection. To have that conversation. To talk about what we learned from last season and be optimistic about the games ahead. To remind our kids that we will always be there.

Play catching. Is it Heaven? No, but for me it is pretty darn close.