If I Could Do One Thing

It was a typical Saturday morning. Knowing I had lots of chores to do, I neither showered nor shaved. I dressed in my “grubbies” – sporting a faded warm-up with a few well-earned holes – in anticipation of the dirt and sweat I would collect throughout the day. Part of my outfit was my beloved Cubs baseball cap complete with perspiration stains and frayed edges.

After breakfast I launched into my yard work. Trimming bushes, spreading mulch and planting flowers – collecting lots of dust and dirt in the process. As midday approached, my spouse reminded me of my commitment to deliver a load of donations to the local help center.

As promised, I took a break from the yard work and gathered the various “treasures”. We are blessed, so many of the items we had to donate were still in excellent condition – so someone in need was going to benefit. In that treasure trove was a flat screen TV which had been replaced by a gift from our children. There was a nice lamp, a toaster, a few bags of brand name clothes, some gently used books and assorted household items.

Still wearing my dirty clothes, I put on my sunglasses and jumped into my full-sized shiny black SUV.  As I headed towards the donation center, the TV and other items were visible through the windows; so anyone could see I had a full load. I drove along a busy four lane road lined with sidewalks where folks were out for walks, pushing strollers and riding bikes with their children. At one stop light, a fellow dad pointed to my old hat and shouted out the open window, “Go Cubs.” At another stop a second man nodded as though to say “good morning” in dadspeak.  I delivered the goods to the donation center where my gifts were accepted graciously by the volunteer and I returned home without incident.

A Jog in the Dark

With a long list of “to do’s”, I filled the balance of that afternoon around my home. Time passed quickly and before I knew, it was time for me to take my daily run. 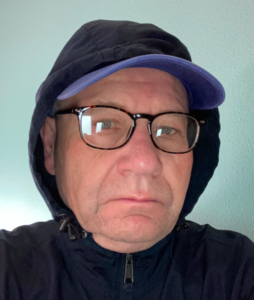 With twilight approaching and the temperature falling, I pulled on long running pants and a dark hooded jacket.  Running behind my normal schedule, I took off on my forty-five minute run hoping to return before dark. I made a loop through our small suburban town, past a school and past a restaurant patio full of patrons. As I turned for home, the twilight began to turn to darkness and the air began to cool, so I pulled my hood up over my cap. In my dark outfit, the streetlights reflected off only my light-colored face.

I ran along that same busy street where I had driven earlier in the day.  As I turned onto my neighborhood street, I encountered a woman walking her dog and I noticed a neighbor watching me as he took out the trash. I did not know their names and they did not know mine. I returned home safely again, then received the expected reminder from my wife that I had gone running without my reflective vest or lights.

To me, it was a Saturday like so many others in my life. I dressed as I pleased. I did my chores.  I came and went – in my car and on foot – without a second thought. Through my eyes, I live in a wonderful country where I feel comfortable to go and do as I please.

But there is another view of that day. I reflected on an open conversation I had recently with a good friend. So, I asked: How would my day have been different if my skin was a couple of tones darker? Driving along the busy street, would my disheveled appearance and dark glasses have prompted the sound of car doors locking and windows rolling up? Would anyone have questioned the valuable merchandise piled in the back of my car?

If I had run through the neighborhood with my face partially covered, but darker, would I have generated suspicion? Would the woman have pulled her dog away from me? Would she have reached for her phone? Would the second neighbor have stood by his trash can to assure himself that I had passed on by – then given a longer look to see where I was headed? What would he have reported to his wife when he returned to the house?

Throughout the day, would others have paid more attention to me and reacted differently? Would just being a person of color have made me a person of interest? Honestly, I never think about those questions. My complexion allows me that privilege. But I know “friends of color” who ask those questions every day; and they share the answers with their children as well.

In that recent conversation with my friend and many others throughout the years of Be There Dad, I have had my naïveté revealed, my perspective adjusted and my view re-focused by men who cared enough to help me understand their perspective. I am proud to say I have listened to them, and they have listened to me. Together we have learned about each other and together we have grown. None of us is perfect, but we are moving ever closer to relationships free from preconceptions.

I am delighted that when Be There Dads gather together at workshops, school events or fellowship times; they look past the color of skin. Rather, their eyes go to the colors of their shirts – recognizing the schools where they serve the children. They share a common respect and common trust. They assume that they are each men of character. They talk about the things that bind them and the dreams they hold for their children.

Giving Them a Chance

I believe we can change the world to resemble a gathering of our dads. If I do not believe that,   I am wasting my time with Be There Dad. We have to try.  When I coached kids’ basketball, we learned about accepting each other, working as a team and valuing our individual gifts and talents. Every season, at that point when we “came together as a team”, I would ask the players how we could take what we had learned together on the court outside the gym. The kids always gave it a try, then they shared their successes with me. Let the little children come. It is possible.

As dads, we can help change the world for our children. If we want each child to fulfill their promise, first we must work to eliminate bias, so they all have a fighting chance. We can move towards a world where we are not quick to judge others because they are different – where we are all free to come and go without apprehension and others are comfortable when we do. The joggers can not do it by themselves. It will take all of us in the neighborhood to achieve the change.  We can show our children how.

I wonder. If I could do just one thing… if that should be my choice.