Recently we held a Be There Dad workshop at a local elementary school.   The audience was a group of dads whose kids all attended this school where there is an active Be There Dad group. Most of these dads had already been involved with service to the school at car rider line and other events. They were working to grow the group.

One of the requirements of the first BTD workshop, is to “close the door” and allow “just dads” in the room. In doing so, we hope to make the atmosphere comfortable for the dads to share their thoughts and ask questions they might not ask elsewhere.

Early on, I suggested that when your children get ready to leave home, they will carry with them a figurative “back pack” filled with lessons, experiences and values they will need to get along in life. As dads, we are responsible for putting some of those necessities in the pack. So I asked, what do you want to put in that backpack?

Among others, I heard the usual responses of hard work, respect, resilience, perseverance, love and faith. But, this night I heard a new answer. From an innovative young dad came the response “curiosity”. “I want my son to be curious. If he is, he will discover new things and find the new ways to accomplish what he needs to.”   Great answer.

The workshop continued and I could sense the “class” becoming more and more comfortable. Guys were opening up, sharing feelings, and asking questions. Others were responding with feelings of their own and relating how they had responded to similar challenges.   I was delighted.   This is what Be There Dad sessions are intended to do.   As the first hour past, dads were supporting and encouraging each other.

Then came the moment we would later recognize as the one which made coming worthwhile. One fifty-something dad had introduced himself as going around the second time. Divorced early in life he had raised his two grown sons mostly by himself. Now, he was remarried and once again raising children who were in elementary school. He shared with this gathering of mostly young men insight collected on his journey. He said money is not important. We will have enough.   Make sure you make memories with your children. In the end, that is what will be important. Heads nodded in appreciation.

Then came the punctuation. He went on to reveal his private story. He told us that a year ago, he was diagnosed with terminal cancer; but, today, he is cancer free.   The message was clear. None of us know how many memories we have left to make. Better get busy.

WHO WANTS TO SIT IN FRONT?

Two days later, I found myself at the National White Water Center for the first time with my grown son and his girlfriend. I flew down the Mega Zip line and struggled on the high ropes course. Mid afternoon, we prepared for our “adventure” trip through the white water rapids.

I listened carefully as the orientation leader instructed us about what to do if one should fall out of the boat. Then, when we began to board our boat, our guide asked for volunteers to sit in the front.   Sensing that that might be the most precarious place to sit, the others were silent. The little voice in my head said, “curiosity.” I wondered why riding in the front would be different. So, I raised my hand and I was chosen. 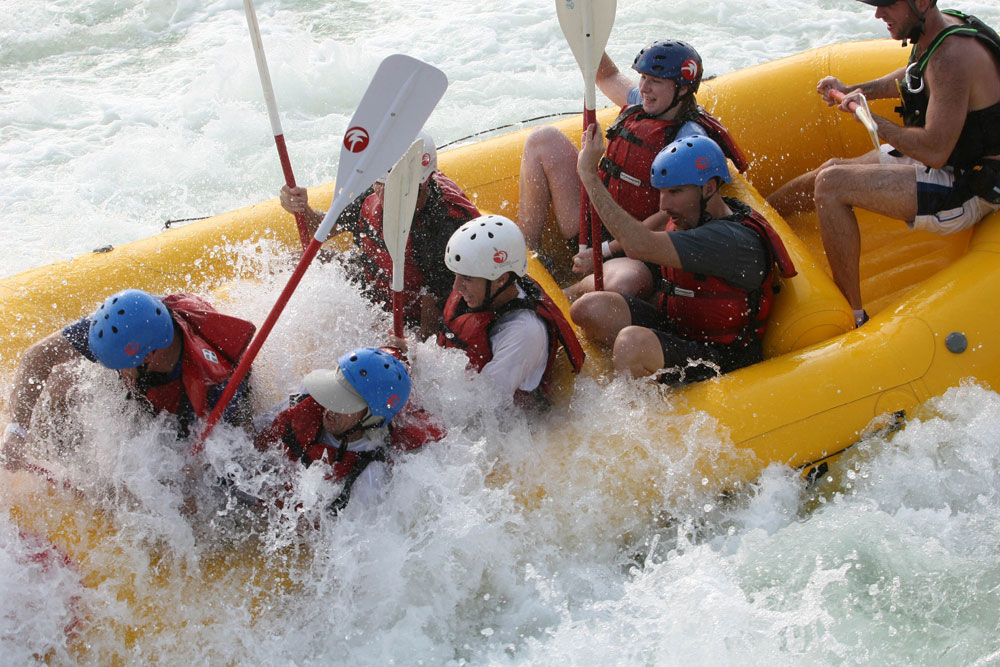 The ride was all we expected and more. Our guide was a college student who was a skilled and experienced leader. Coincidentally, he had played soccer on a Coach Jeff soccer team when he was 5 years old, so he did his best to make the ride thrilling. He accomplished his goal. At one point, he showed us how to “surf the rapids” – turning the front of the boat into the oncoming flow until the water rushed over the passengers and flooded the boat.

At that point, I figured out why they asked for volunteers to ride in the front. As the water flowed under me and the boat took a quick turn to the left, I was picked up and thrown out. My curiosity was satisfied. I understood what was different about sitting in the front.

My son and the others watched with surprise as I was swept aside and disappeared under the water. Although I came up trapped directly under the boat, having listened to the safety lecture, I knew exactly what to do. I moved calmly to the edge of the boat and surfaced nearby. My former soccer player grabbed my vest and effortlessly pulled me back on board. I was completely soaked. The water was cold, but I was never in any real danger. My “swim” actually invigorated me. Still, my companions looked relieved as I moved forward dripping to reclaim my seat at the front once more.

As I drove home that afternoon, I felt sure that I had made a Be There Dad memory. More importantly, I made yet another memory with my son. It was a memory we will share many times at our Thanksgiving table and on other sunny October days that remind us of that one. Some day, I hope we will share the tale with my grandkids. My son will say, “Remember the time, you fell out of the boat…?” He will relive the moment I vanished in the foamy water. I will feel the shiver of the cold rushing water. And we will laugh again. We will both feel the sense of love and belonging that such a memory rekindles. Perhaps my son or daughter will use our story to teach their children lessons of curiosity and family.

At my age, there are those who think I should have gotten off my adventure train at a station somewhere before I arrived at the one for zip lines, high ropes and white water rafting. But, if I had, I would not have gotten wet. In the end, there would be a page missing in the book of my life. Opportunities to spend time with your kids happen for a reason. They are chapters in your life story. You choose to write them or not. They may not come again. Young and old, all dads have memories waiting for them. “I have promises to keep and miles to go before I sleep…”

Spend time with your kids. Be curious. Sit in the front. Don’t be afraid to fall out. Make a memory.