Mentor You, Mentor Me

I stood on the sidelines and watched our twelve-year-old soccer team run up and down the field. I was pleased. It seemed they were executing what we had taught in practice earlier that week; and when I shouted instructions, they worked to respond accordingly. A coach’s dream. 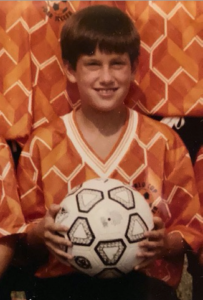 The leader of that orange and black clad team in this faith-based recreational league was an energetic brown-haired boy named Bryce. The other players looked to his lead because he was caring and compassionate about everyone, but he maintained a strong sense of competitiveness, too. We wanted to win. He played center forward and he was one of our most proficient passers and scorers. I was proud of the way Bryce and that team played together. I hoped that my coaching was having a positive impact. Honestly, in one of my first years of coaching soccer, mostly I just “showed up”, knowing that my presence could make a difference. Of the fifty teams I coached in that league, the picture of this team is one of the few that still hangs in my office. A constant reminder to keep showing up.

Fast forward over twenty years to last month. I was sitting in the sanctuary of a large church on a Saturday morning with some 300 other men at a conference about fatherhood. On the stage was the organizer of the event and host for the day – an energetic brown-haired man in his mid-thirties named Bryce. His soccer playing days behind him, he now leads an organization spreading faith to sports fans. He is a husband and father, too. The men follow his lead because he is caring and compassionate, and he still has that strong sense of competitiveness. In this context, winning means assuring that all children have a male role model in their lives. That day, I was a player on his team when I facilitated a session on male engagement as part of the conference. He was coaching me.

Shortly, a video was played. It featured a young man about thirty named Colby who spoke about his experience mentoring a fatherless youth in our city. It was a heart-warming story about serving and giving back. Believe it or not, as a youth, he had played point guard on a basketball team I had coached in the same league. Whenever I have seen him or his father since, we always reminisce about a “legendary” game when we won with only five players and no substitutes. We called the team the “iron five.” An early lesson in grit and determination. I had sought to guide him as I had Bryce. Now, like Bryce, he inspires me. Old friends – they can see where you are, and they know where you’ve been.

Still on the sidelines, today I watched as two of my former players told their stories and led the large group of men to be more involved in fatherhood. I like to think that in their work were bits and pieces of what we had learned and practiced together years ago; even though they both had learned to play a new more meaningful game – fatherhood.

While coaching, I had wondered if I would have an impact on the lives of these two young men. I wondered if I would make a difference for any of my players. I coached dozens of basketball and soccer teams in that league shepherding soccer players as young as five years old and challenging basketball players who were seniors in high school to do their best. In fifteen years, I interacted with some five hundred players as well as their parents and siblings. I taught fundamentals of the game. I led devotionals at each practice and prayers before each game. I tried my best to teach the lessons of life and act as a role model. We practiced teamwork and discipline. I emphasized sportsmanship and fair play. I continually asked myself the Be There Dad question, “What did your dad teach you?” Still, I wondered.

Sometimes you don’t know. Kids grow up and move on to other pursuits. Some move on and you never see them again. But, if you are lucky, some re-emerge. One might invite you to participate at a men’s conference he has organized. One might show up on a video promoting mentoring. One might invite you to his high school graduation, birthday party or her wedding. You realize that maybe you did make a difference.

Over time, I had a chance to influence the parents as well. One basketball season a team of teenage boys was enamored with the “moves” they could make and how they looked on the court. My overriding lesson for that season became that moves and looks do not count unless you actually put the ball in the basket. I constantly reminded them, “you have to finish.” Later, a dad told me that he had used that concept with all four of his children. When working on homework, household chores and the like, the dad would perpetually remind his kids, “Coach Jeff said nothing matters if you do not finish.” Lesson passed on.

I appreciate that probably I did make a difference for most of my players. But I also understand that my influence was only a part of their development. I was just one steppingstone on their path to adulthood. I played my part, then they moved on to another coach, teacher or pastor who helped them take the next step. Most times someone else had a larger impact on their success. I learned that I was not all the steps, I was only one. Others do their part, too. Each of us is essential. Together, we became the steppingstones that allowed the children to grow towards their potentials. I am at peace, knowing that I was present when I needed to be; but I understand others were present, too. And so it is with the dads we continue to enable and encourage. Through workshops, articles, fellowship and other sharing I can be one of many steppingstones in their lives, too.

The Work Goes On

In that church, I recognized the circle of life as it came around once more. Years ago, I had poured into the lives of Bryce and Colby. Today, as mature young men, they are pouring into mine. Through their example they are motivating me. They inspire me with their work, passion and energy. They encourage me to continue to do the work of Be There Dad so that other dads will be engaged. I am reaping the benefits of the seeds I planted many years ago. Those seeds are blossoming in a new lineup of coaches and mentors who are sharing the power of presence with yet another generation.

The work goes on… and the dream shall never die.