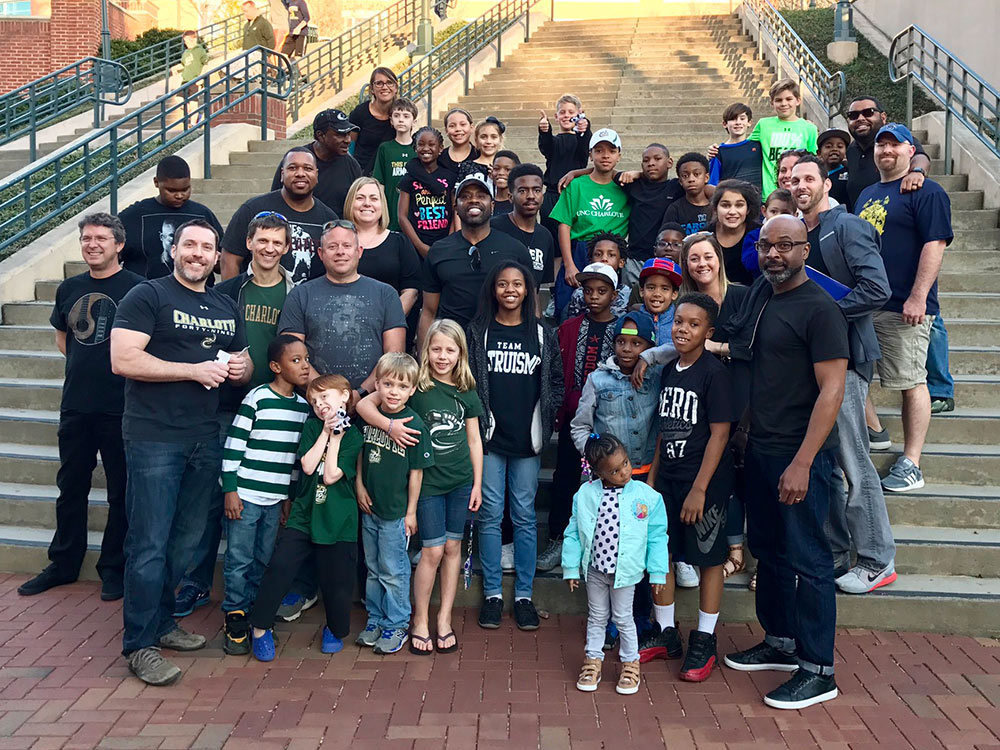 Saturday evening, I looked with joy at the picture of a group of dads accompanying children to a local college basketball game. All smiles in the photo, these are men who volunteer their time to mentor children in their elementary school. This evening after a week undoubtedly filled with work and other obligations, they were spending time with children. These guys had options. They could have easily been home stretched out on a sofa or they could have been at this same basketball game with others their own age thinking about themselves. But instead, they chose to give children that precious gift we talk about over and over – their presence.

When he sent the picture, the leader of this group reminded me, “of those who much is given, much is required”.   A man who is currently nurturing his mother as she battles cancer, he appreciates the significance of time spent together. So, he gives his willingly.

I am wondering, how much these young mentees will gain from this evening and others like it? Will they see men who are role models of how they want to be when they grow up? Will they be encouraged by them to fulfill their own potentials? Will they find a chance to share their dreams and aspirations with someone who will listen and help them get there? Will they be motivated to one day be mentors themselves?

The next day, I went to see the movie Hidden Figures, the story of black women who worked behind the scenes at NASA in the early years of the space program.  The obvious story of discrimination was compelling and disgusting as we look back from our world today and that is an issue to be addressed at another time. But there was a secondary story I could not help but see. It was that same story of presence and commitment I saw in the mentors. While that commitment came in different ways, eventually it showed itself… and the power of presence once again prevailed.

I appreciated how the potential of two of the women was uncovered and released. Those discoveries changed their lives and the course of history. A scientist from Poland without hesitation recognized the gift of the first young woman, Mary. He demanded that she be present on his all-male team, then encouraged her to pursue further education. I wonder how that simple act of support gave her the courage to continue her education and eventually become an engineer at NASA?

A reluctant director of engineering discovered the gift of a second woman as he witnessed her repeated perseverance and exemplary performance. Initially coming from an unappreciative personal perspective, by spending time and listening to Katherine, he too eventually saw beyond her appearance and became her mentor.

These two examples made me think about the mentors in the picture. Some of those men are like the Polish-born scientist. They willingly accept others based on the “content of their character.” Without reservation, they see the gifts and encourage their mentees to fulfill their potential despite what others may think about their limitations.   In the movie, Karl Zelinski said to Mary, “I’m a Polish Jew whose parents died in the concentration camp. And now I’m [in the space program]. We are living the impossible.”   Like him, our dads believe we all can live the impossible.

Other mentors help to eliminate barriers that stand in the way of young people, sometimes after learning for themselves that those obstacles even exist. Once he understood the hindrances,

Al Harrison got rid of the separate coffee pot and beat down the sign of exclusion above the restroom. In the end, he invited Katherine to be present in the inner circle of the control room. Mentors help clear the path to success. But at the same time, they do not accept anything less than the best. Astronauts’ lives depended upon others doing their best. To quote another famous space adventure, “failure was not an option”.

In the movie, there was a focus on the technology of the new IBM computer that could replace people and push the program forward. But in the end, John Glenn’s mission was successful because a woman personally calculated the right path for his re-entry. Mr. Glenn put his life in the hands of Katherine when he said, “its hard to trust something you can’t look in the eyes.”

Mentors do that. They look into the eyes of young children and see their potential. They look past their appearance, their history, their circumstances and see their souls. The children feel that support, so they find the confidence and courage to be all they can be. “To the world you may be one person, but to one person, you may be the world.” Mentors are heroes. They help our children calculate the trajectories of their lives. They help them reach for the stars.