Your Picture or Theirs?

Yogi told us, “you can observe a lot by just watching”…. So, I watched as folks gathered on the elementary school playground where the dads group had planned a movie night on the Friday evening before classes were scheduled to begin. Flyers had been sent via email to all the school 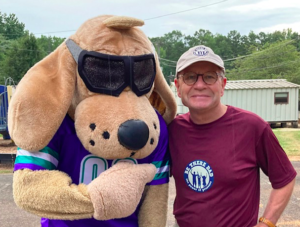 families. The food trucks were in the parking lot. The popcorn machine was popping. The large blow-up movie screen was in place. Families had begun to place their soccer chairs in their favorite places to view the movie together. Kids were running around with their classmates. A local team mascot was making a  “guest appearance”.  A well-planned event.  With no young kids, in my role with Be There Dad, I stood in the background as an interested observer.

Members of the school’s dads group who had coordinated the event were present in their bright yellow shirts. As the clouds darkened overhead, the leaders were anxiously checking the radars on their phones… hoping that the impending rain would hold off a few hours. Unfortunately, despite their optimism and patience, the leaders had to call off the event as the light rain continued and it seemed more was inevitably on the way.

I saw families gathered on a playground. As they waited for an hour or so, away from screens and other distractions, they were spending time together. Kids playing without structure or guidance. Laughing and giggling. Boys encouraging dads to look as they took shots at the basketball goal. Parents and kids engaging in light conversations. Sharing hot dogs and popcorn. Some snuggling together in chairs. Children introducing their parents to their new best friends. How could that scene be disappointing?

I was reminded of the time my son and I went to Wrigley Field to watch the Cubs play. We flew to Chicago just to see the game. That night was a rain out, too. We never saw the game, but it remains one of the best days of my life. I wrote in Be There Dad:

Sometimes despite all the good intentions and organization, our plans just do not work out as we hope. But, I have found that in every case, in every situation, in every cloud, there is a silver lining, if we take the time to look and appreciate it…

A steady rain fell on the large blue tarp with the Cubs logo covering the infield. Puddles stood where home plate and the baselines were underneath. We had come early to hopefully take in some batting practice, watch some infield and just soak up the experience; so it was still two hours until game time. We remained optimistic, we sat and waited. Just as we had planned, we ate our dinner of the bratwurst and hot dogs that have made the venue famous. We took a few photographs to memorialize our trip. We talked baseball. We talked about Wrigley Field and the significance of being in a place full of so much history…

When I told others of our experience, everyone expressed sympathy for us having gone so far and missing out on the game. Folks assumed we were disappointed. And we were… to some extent. But, almost immediately, I knew there would be a Be There Dad story in there somewhere…

So, we missed the game. Disappointed? Sure. But the truth is, we can watch another one on WGN almost any night this summer. Surely, we will travel to D.C. or Atlanta sometime and see the Nationals play in person. A waste of time? Not really.

A popular song asks us all, “what if our blessings come through raindrops?” That night I watched as blessings fell before me. It looked like a rainout until once again I took the advice of Laurie Beth Jones, and “let it go”. You see the trip wasn’t about getting the grail … it was about spending time together on the journey … that was the prize.

Back on the school playground, as the crowd was dispersing, I wanted to get a picture of the dads 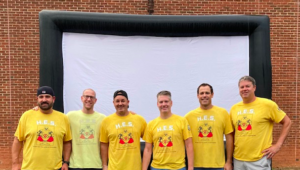 who had coordinated the event. They lined up in front of the large movie screen. But, before I could take the shot, their children clambered to get in the picture. Politely, I asked them to let me get one of their dads, then they could join in the next one. Reluctantly, the kids stepped aside for a moment.  Then with a nod from me, at once each one rushed to claim the spot in front of their own dad for the second picture. Some quick hugs and high fives. They assumed their poses and I took the second picture as promised. Everyone seemed satisfied.

Again I watched and wondered. Did the children want to be in their dads’ picture; or did they want 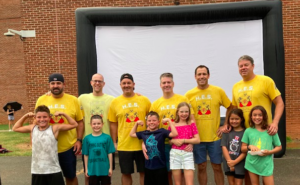 their dads to be in their picture?  Are our children seeking to be a part of our lives, or are they hoping that dads will be present in theirs?  What do you see?

For a moment, observe with me. On a night when the weather was ominous and the entertainment was cancelled; families were together, talking and laughing.  The kids were happy that their dads were there. A memory they will re-visit for a while.  Perhaps more than just observing, we can learn when we watch. It is not the movie or ball game, but the time we spend together that is the prize.