Each Thanksgiving, while it is a time to give thanks for all the blessings which have been bestowed on me in the past year, I like to pray for those blessings that I hope will be forthcoming in the next twelve months as well.

Our Bride, One Path

In the last week, I was fortunate to attend the wedding of a long-time friend.

Our family had known the bride since she was two years old. Now a beautiful confident woman in her late twenties, she had graduated from college, earned a Masters degree and is pursuing a successful career. She is engaged in volunteer work, attends church regularly and has an otherwise wonderful life. A shining example of how we hope to see our children grow.

At the reception, like many other weddings I have attended, heartwarming toasts were made about both the bride and groom. Conversation among the attendees first focused on how they knew the bride and led to how they had impacted her life. Those chatting were former teachers, soccer coaches, Sunday school teachers, mentors, aunts, uncles and the like. I had been her soccer coach. My spouse had been her Sunday school teacher. Many had been what I call “stepping stones” on the bride’s path to her current station in life. 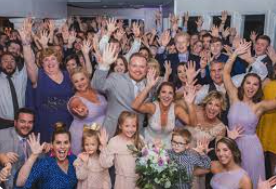 As the toasts were made and we raised our glasses, I am sure that many of us were proud that we had been a part of her journey. We celebrated along with her, believing that in some way, small or large, we shared in the responsibility for her success. Thoughts of “it takes a village” undoubtedly were in the minds of many. Surely, the bride had done the hard work and stayed the course, but we believed we had contributed, too. Her future was bright. All was well that evening. All this was as it should be.

Other Lives, Other Paths

This same scenario has played itself out in countless wedding celebrations; but, on that same day, at almost the same time, a memorial service was being held for the victims of a mass shooting on a college campus. Three students had been killed by a young man and fellow student. Later that evening another young man opened fire in a club and killed young folks who were dancing. These events and the losses were tragic. We all find it unimaginable that someone could engage in such senseless killing. All of us, including the families of the victims look for answers; yet, like similar tragedies which have occurred in our country, there are few clear reasons and certainly none that will relieve the pain, grief and the loss.

Those other young souls had travelled on another path. Many of us, myself included are quick to place blame on these young men. We ask ourselves how they could commit such heinous crimes. Certainly, there is accountability to be assigned and consequences to be paid. As parents, we often judge the parents of young perpetrators and wonder how they could let their children do something so terrible. We stand outside the fray and render our opinions.

While we take the necessary time to pray for those who have been injured and grieve with those who have lost loved ones; I wonder how we might work to prevent the next such tragedy. Unfortunately, the recent history of our country predicts that there will be other such catastrophes, if we do not do something.

I think again about the bride. I think about how we all congregated to celebrate her life. I think about all the people who could testify how they had been a positive influence in her life. I am confident that the bride herself would acknowledge that she had been supported by those gathered around her on that joyous occasion. So, I wonder, are there other children who we should be supporting in a similar way? Without focusing on any individual and knowing that all situations are different and complex; I wonder if all children had positive influences like our bride, would their lives be different? If they had a soccer coach who encouraged them. If they had a music teacher who would not accept less than the best. If they had a mentor who was willing to listen. Would they make different choices?

I think about the young children in our schools today. I think specifically about young boys in the second, third, and fourth grades – just beginning to make choices, but still at ages when they might listen. I wonder about the decisions they will make. I wonder if one of them might “go down the wrong path” and commit an unthinkable crime. I wonder if one of them might become involved in questionable activities and themselves become victims of violence. If those tragedies occur, it will be easy to say, that another young man has failed. But, I wonder if we should consider that we have failed him, too? All too often children find themselves in circumstances that they cannot control. Although difficult to accept, as a community, should we share responsibility for the failure of those children like we share the responsibility for the success of others? We may not know which children will succeed or fail. Any of them may be vulnerable. All of them are precious souls.

Our Be There Dad vision is that all children will feel the power of presence. This week, a group of dads and dad like persons participated in the first meeting of mentors at a local 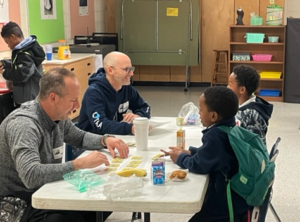 elementary school. They call them “Breakfast Buddies”. Men come to school and spend thirty minutes with young students. Sharing a meal. Having a conversation. Listening. Showing that they care. These conversations will continue for a while. Then, as these young boys grow, I hope other men – coaches, middle school teachers, and other mentors will become their stepping stones and walk with these boys on the next segments of their journeys. If they have role models, if they have someone to talk to; I hope some day folks will we be toasting them at their weddings instead of reading about them in the news.

So, I come back to my prayer for this Thanksgiving. First, among my many blessings, I give thanks for all the men who have engaged with children this year to help support them and make their lives better. Second, I pray that even more men will hear the call and find ways to become involved with those children who may need a mentor, coach, teacher, or just a friend. I wonder what might happen if we build our “village” around ALL the children and support them as we have supported our bride?

A prayerful and Happy Thanksgiving to you all.