The Oath of Office

“I do solemnly swear that I will faithfully execute the Office of  …  and will to the best of my ability, preserve, protect and defend the Constitution of the United States. So help me God” 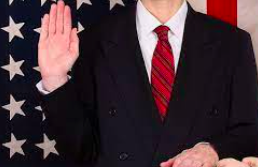 If you have watched the news lately you have probably heard this or a similar oath more than one time.  Along with these oaths has been continuing discussion about what taking an oath means and the responsibility of the person taking it to fulfill the duties of the job.  In plain language an oath is a promise – the dictionary  says it is “a solemn [usually formal] calling upon God to witness to the truth of what one says and to witness that one sincerely intends to do what one says.”  The folks who recite these words are servants who take the words literally.

The recent attention to this topic has encouraged me to revisit what it really means to take an oath.  Swearing an oath should be a predictor that the person taking it will fulfill the duties and responsibilities of that role.  As I have done with other analogies, that led me to wonder what it would be like if dads were required to take an oath and then were held accountable for the execution of their duties. But immediately  I realized that the dads I know… and especially those men who consider themselves Be There Dads,,, already take an oath, and commit to fulfill their duties to their children.

Taken privately and silently to themselves, I suppose the dad oath goes something like, 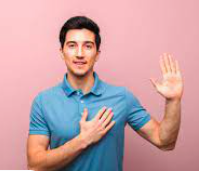 “I do solemnly swear that I will faithfully execute my role as a dad and will to the best of my ability, preserve, protect and defend the lives and welfare of my children. To be present and engaged; and to support my children in fulfilling their purpose and potential”  So help me God.

I believe Be There Dads embrace the idea of such an oath whether it actually exists or not. Men enter into “fatherhood”, sometimes by choice, sometimes by chance. But men choose to be “dads” by their presence in their children’s lives.

Fathers’ names appear on birth certificates. They appear on mortgages and car registrations. They sign papers necessary for the children to enter school. The pay the grocery bills.  But those who wish to be called dads do more. They take the words of their oath seriously – they swear to be present and engaged. They know that the job is hard … it requires difficult decisions… it requires sacrifices of time and energy …. and at times the duties of the job are all consuming.

Dads understand that they cannot punch in and out. From breakfast to carpool line to after school activities, the daylight hours are full. They know that overtime is required, too – often at a moment’s notice. During the dark hours, dads support their kids through teething, sickness, nightmares, being cut from the basketball team, not being ask to the dance, doing homework and much more.

Be There Dads dads say yes when asked to volunteer at open house, when asked to be the assistant coach, ride the bus on a field trip or monitor an EOG exam.   Dads willingly forego watching game seven of the playoffs to answer inquisitive questions; to sit patiently next to them while their kid does math homework; take a few more practice shots in preparation for the big game; or make that last minute trip to the store to retrieve supplies for the science project that is due tomorrow.   Dads know they are “on call.”   Always ready for the trip to the ice cream shop to celebrate a “victory” or to snuggle in a chair after a hard fought defeat.

Dads do not shirk their responsibility or delegate their duties. Dads do not accept phrases like “failure to execute” or “dereliction of duty”. They know that their children’s lives depend upon them fulfilling their oath. While many others believe the “term of office” is 18 years or less, dads know their duties will continue forever. So, they march on. Once a dad, always a dad.

In the end, there will not be a committee or a court that determines if they fulfilled their duties. Dads will be judged by the welfare of their children.  Like the first-time coach who discovers his whistle, shirt and hat alone won’t make him successful; it takes more than just appearances to be a dad. It takes a willingness to reach out and take their children by the hand. To get down on their level, to play with them, to listen and try to understand. Dads acknowledge that the job takes fortitude and courage. Fortunately, sometimes it can be as easy as asking their kids to give them a chance, and then giving it their best effort.

I encourage you to ask yourself, if are you willing to take the oath to serve as a Be There Dad.  Will you fulfill your duties to the best of your ability? Will you refuse to waiver in difficult circumstances? Can you accept that you will not always succeed, but you will always do your best? Will you keep the welfare of your children as your first priority? In all you do, will you act as a role model for your children? If you can swear to all this, you may accept the role of a Be There Dad.

So help you, God.