On this day in August when the Cubs are still in position for a place in the playoffs; yet the stock market plunged over 500 points, I thought about one of my favorite stories once again.

Sometimes despite all the good intentions and organization, our plans just do not work out as we hope. But, I have found that in every case, in every situation, in every cloud, there is a silver lining, if we take the time to look and appreciate it.

As a college graduation present, I gave my son a unique gift we both could share. I am a diehard Chicago Cubs fan and he had become a devoted Washington Nationals fan. The gift was a trip to Wrigley Field to see our two teams play. It would likely be a once in a lifetime event, since we never know how much longer Wrigley will survive. 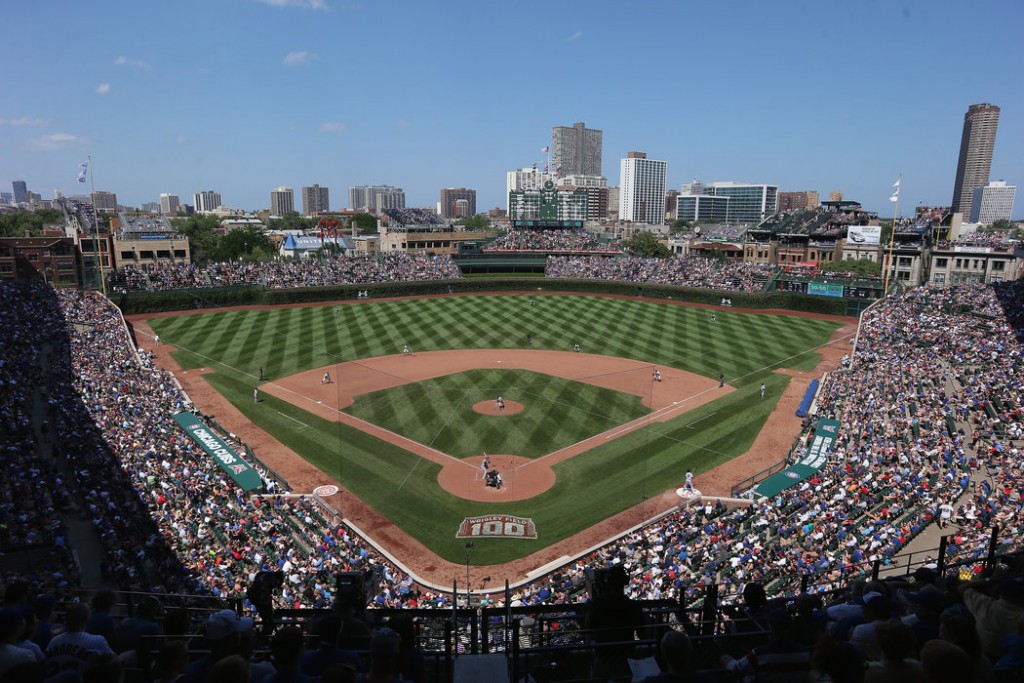 Excited about the possibility, I dove into the planning six months early. That winter I checked the schedule for the only three days the Nationals would be in Chicago. I purchased tickets. With a pile of frequent flier and reward points, I made arrangements for airline, hotel and rental car. When the day finally came, I was thrilled.

The trip to Chicago began just as we had planned. Great flight. On time. Rental car and directions were fine. Hotel room was ready. Lunch at a local restaurant proved to be an ideal choice. We spent some time touring Northwestern University and walking along the shore of Lake Michigan. Things couldn’t have gone more smoothly.

However, our luck began to turn as we boarded the “el” for our first ride into the city. The skies were gray and it started to rain. Thinking positively, we hoped it would blow over. We were encouraged as we walked the final blocks to the stadium. We passed many other devoted Cubs fans wearing red and blue home team shirts and hats of all shapes and sizes. We knew we were about to experience the “friendly confines”.

We entered the gate and found our seats. They were terrific. About thirty rows up behind the Nationals dug out, we knew we would be able to see the players and the action clearly. We were ready. However, the weather was not. A steady rain fell on the large blue tarp with the Cubs logo covering the infield. Puddles stood where home plate and the baselines were underneath. We had come early to hopefully take in some batting practice, watch some infield and just soak up the experience; so it was still two hours until game time. We remained optimistic. We sat and waited. Just as we had planned, we ate our dinner of the bratwurst and hot dogs that have made the venue famous.   We took a few photographs to memorialize our trip. We talked baseball. We talked about Wrigley field and the significance of being in a place full of so much history. It is a place that many consider hallowed ground. I had visions of Ernie Banks, Ryno, and even Lou Piniella. As we looked up at the press box wondering who might sing during the seventh inning stretch, I thought, Holy Cow! We are in Wrigley Field.

Unfortunately, the rain continued and an hour after the scheduled start time, the game was postponed. After the collective groan from the crowd, reluctantly, we left the stadium, caught the train and returned to our hotel. Without time in our schedules to stay any longer, the next day we returned home, having not seen a baseball game in Chicago.

When I told others of our experience, everyone expressed sympathy for us having gone so far and missing out on the game. Folks assumed we were disappointed. And we were… to some extent. But, almost immediately, I knew there would be a Be There Dad story in there somewhere. I am not ashamed to say, that God’s gift to me has been my willingness to see the silver lining in every cloud. However, this was perhaps one of my biggest challenges. But then again, maybe it wasn’t. Like the outfield at Wrigley, I just needed to let it soak in for a while.

For months before, when I had told friends about our plans, I had repeatedly said, “we are going to Wrigley”.   We could have [and we have] seen our favorite teams play in other venues closer to home, Nationals Park and Turner Field to name two. But this time we were going to Wrigley Field! We were going to a special place unlike almost any other in sports. A place that many folks have on their bucket list. It is a unique place where baseball can be experienced almost like it was in 1914, the year the stadium was built, up close and pure.

I must say, as I sat and watched the rain come down, I felt a sense of peace in a place that has been described as a sanctuary. For a short while, I felt that sense of reverence that others before me have felt. In this stadium there was no massive “jumbotron”. The outfield walls were covered with ivy. There were still bleachers in left field. As the crowd slowly filled in around us, I saw families with kids of all ages. We saw moms and dads – all wearing some sort of Cubs gear. All prepared to cheer for their team, despite the fact that they were 16 games out of first place with no hopes of making the playoffs. In the air I could smell hot dogs, bratwurst and popcorn. I watched as fathers and sons shared bags of peanuts. There was an overwhelming sense of tradition, loyalty and optimism. We were sitting among the “faithful”.

In a reflective moment, I remembered that this is how baseball is supposed to be. I could hear the words of James Earl Jones’ description of the Field of Dreams as if he was speaking to me about Wrigley, “America has rolled by like an army of steamrollers… But baseball has marked the time. This field, this game, is part of our past. It reminds us of all that was once good and it could be again.” As I sat watching the rain fall on my field of dreams, for a short while I was reminded of “all that was once good and could be again.”   On that day when the stock market plunged over 600 points and millions of others were thinking about their 401(k)s; I sat calmly eating a brat, my son at my side. In that moment and place, all was right in my world.

So, we missed the game. Disappointed? Sure. But the truth is, we can watch another one on WGN almost any night this summer. Surely, we will travel to D.C. or Atlanta sometime and see the Nationals play in person. A waste of time? Not really. Now, my son and I can say, what so many others have hoped to say, “We have been to Wrigley”. I have felt what others have felt in the friendly confines.   I have been to a place like no other. Another memory added to the list that makes up the parables of my life.

A popular song asks us all, “what if our blessings come through raindrops?” That night I watched as blessings fell before me. It looked like a rainout until once again I took the advice of Laurie Beth Jones, and “let it go”. You see the trip wasn’t about getting the grail … it was about spending time together on the journey … that was the prize.

Some days just do not go as you plan them.   Some days the game and the score just don’t matter. Sometimes it is just about “being there”, Dad.