Tip of the Iceberg

With mixed emotions, in the last week or so, our organization has gotten a lot of visibility as a result of the massacre in Texas. 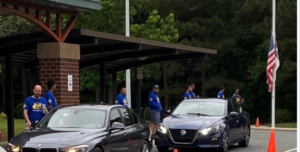 A dads group connected to  Be There Dad® responded quickly and the dads were present at a local school during car pool line for the three days following the tragedy. The presence of these men brought comfort to the parents who were leaving their children for the school day. The students themselves surely felt more at ease when they were greeted with good mornings and high fives by the dads of their classmates – men they recognized from their presence on campus all year long.

Three local television stations reported the story.  https://www.wsoctv.com/news/local/be-powerful-presence-group-dads-make-sure-students-feel-safe-local-school/E4EDOMDVXNBMDL6Z3YBYAS7X44/.  The video circulated further on social media. Many who saw the accounts were amazed at the response of the dads. Many have reached out to us and inquired about establishing similar dads groups at their schools. Many saw an image of safety and security. They praised the men for their courage standing at the ready against potential violence.

All this was good. At a moment of crisis, dads did step forward. Dads did become “gap soldiers” standing between the school and those they imagined might bring violence to the doorsteps of their community.  Their courage was one way to address the unthinkable.

More Than Manning the Life Boats

But I want to share the “rest of the story”. I want to share the impact of these dads groups that reaches beyond car pool line. Like the view from the bridge of the Titanic, while looking for dangers from their car pool line posts, these men know they may only see the tip of the iceberg.  Their mere presence on campus can be a deterrent to violence, but, they are doing so much more to impact that threat in less visible, yet just as effective ways. 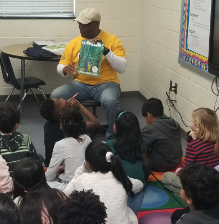 The vision of Be There Dad is that all children will feel that power of presence.  Because these men are welcoming, children get noticed. As they exit their parent’s car, “How you doin”; a high five and “Have a good day” may bring a smile to their face and change their attitude about the day before them. Some one cared enough to greet them. Maybe they can forget about the argument they just had with their sister, or feel a little less anxious about the upcoming math test. From the front door on, these men work to build relationships with the students. That is their primary objective. For many the relationships will last many years – to times when the issues become more serious and dangerous – sex. drugs and rock and roll. One day a troubled teenager may reach back to that “car pool dad” in their own moment of crisis.

As children interact with these men at various activities and events, they see men who present an image of what a healthy adult should look like. 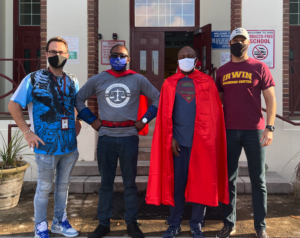 Responsible, trustworthy, loyal, hard-working, dependable, cheerful, engaging. Children can see someone “they want to be like” when they grow up. They see a persona of character to aspire to as they pass through the years towards adulthood. To children, these dads can be heroes.

Dads have the opportunity to engage the children in conversation. Perhaps most importantly, they offer an opportunity to listen. At a cafeteria lunch table, during a reading session, on the playground, or just walking down the hall, there is opportunity for the kids to connect. “Hey Mr. Hendrix, can I talk to you?” Perhaps they will express their own frustrations – about being bullied, arguments with their parents, their parents’ divorce or loss of a job, or an argument they had with another student.  Because they are “there” the dads often become a sounding board – sometimes acting as a problem solver, but more often being able to make a professional – teacher, counselor or principal aware.

By engaging and encouraging, the men have the chance to uplift and build self-esteem. 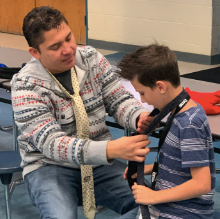 With the goal of helping all children find their unique purpose and potential, dads can help children feel good about themselves. They can shine a light on their self-worth. Perhaps preventing that child from slipping into a state of discouragement, hopelessness and later engaging in destructive behavior.

During all their interactions, and especially one-on-one opportunities, like mentoring, lunch buddies and coaching, these men fill the back packs of their own kids and others with lessons, experiences and values that they will carry with them forever. Preparing them to face the challenges they will encounter as they grow.

As they fellowship and support each other, these dads work collaboratively with the parent-teacher organizations, with the moms and the teachers. Together they are rejuvenating the neighborhood concept – where every parent “looks out for” every child.

Car pool line gets the publicity. That is a great thing.  Car pool line “opens the door,” but, other activities and engagements may be even more important in the long run. That is why we feel it is critical to establish dads groups in schools. When dads are involved in the lives of kids, the likelihood of good things happening increases and the likelihood of bad things happening goes down.  Perhaps if we engage our children we can prevent violence before it occurs.  Coming together as a community and putting the interests and the future of our children first have to be our priorities. Our presence is the simple answer.

Beginning in August, Charlotte-Mecklenburg Schools will launch the Male Empowerment Network initiative. Be There Dad will be the resource to coach and guide schools to establish dads groups in schools across the county. Recently, more calls have come to us from parents and teachers in places from Concord to Raleigh to Austin, Texas. We will answer all those requests. The time for action continues to be now. The time for action comes every day.