Walk with me…in my Sandals 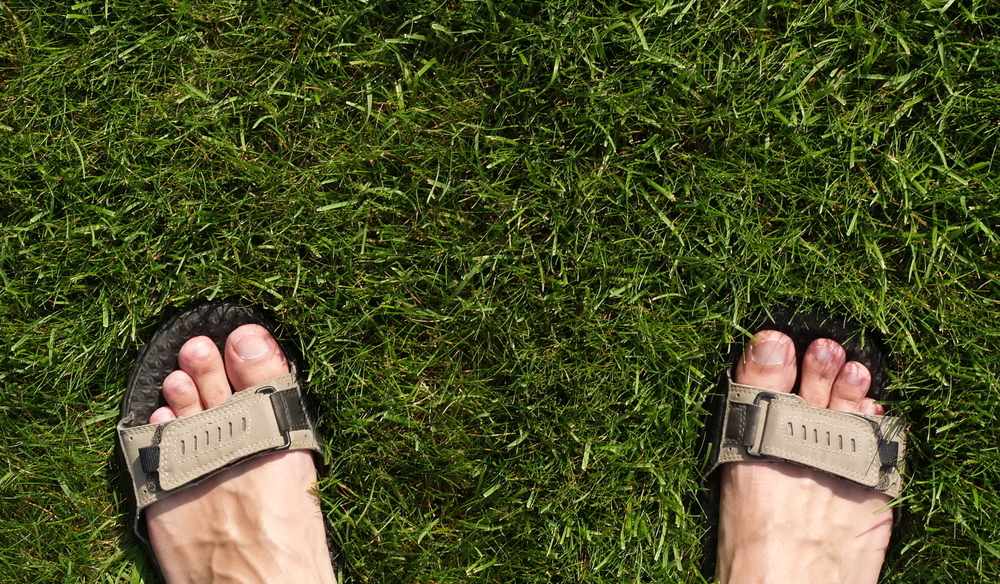 I sat in the audience of commencement exercises to support my future daughter-in-law as she was about to graduate from law school.  Waiting for the festivities to begin, like many of us dads, I struck up a conversation with the gentleman about my age sitting to my left.  He too was there to support an in-law.   His graduate was the young man who had only the week before married his daughter.

As we waited, he told me a story about their relationship.  Some five years ago, the young man had come to the father’s home during the early stages of dating his daughter.  On that occasion, the dad described the son’s appearance as a bit “scruffy” – sporting a beard and in need of a haircut.  In addition, the young man was wearing sandals.  In his own way, the dad expressed his concern.  Nonetheless, with the boldness of a college man, the young man expressed his intentions to marry the daughter in the future and his plan to attend law school.  The gentleman told me that he looked again at his appearance, then with  “fatherly skepticism”  he responded saying something like, “if you graduate law school, I will be there wearing sandals, too!”

So, here we sat, some five years later.  The young man kept his word.   He completed college, married the girl of his dreams and sat poised to receive his diploma from law school.  And, so his now father-in-law told me he had kept his word, too.  A successful business man dressed appropriately in blazer, button down shirt and stylish black loafers; he pulled from under his chair a pair of leather sandals.   He intended to change his footwear when the commencement concluded.

One can only imagine what may have gone through the son’s mind when his future father-in-law put out the challenge to him originally.  I bet it was something like, “Game on, old man!  I will show you.”  I do not know if that challenge was the motivation that caused him to get through the next five years of school.   Perhaps he would have made it down that road even without his father-in-law’s encouragement.  But, perhaps by accepting the challenge, he sensed it would ensure that he would earn his respect and gain his support.

As I looked around the audience, I saw others who had come to support their own graduates.   Families and friends of all shapes, sizes, colors and religions.   For many this was the first celebration of having a lawyer in the family.  For many it was a historic day.  Like my new friend, most of them had surely found their own ways to encourage and support their graduates.  Perhaps others had made similar commitments.  For sure, they were all present for this celebration.

During the ceremony, more than one speaker acknowledged the necessity of the support from the families and friends.   Having completed their most rigorous academic adventure, the graduates must have also recognized that they could not have done it themselves.   From funding for tuition, to help moving into housing, to letters, phone calls, texts and ultimately to their presence under the oak trees that afternoon, those in the audience had been a part of the journey.

Behind me sat a family that filled an entire row of chairs… sixteen strong.  At the reception following, I counted groups of similar size.   And as importantly, I noticed the graduates who stood with only one pillar next to them.   The power of presence was in that place.   It was embodied in those sitting, listening intently for “their” name and applauding politely when they had all been called.   They had not attended classes, suffered through late nights cramming for exams or felt the terror of having no clue how to answer  the single exam question that would determine their class grade.  But they felt a part.  Their hearts beat faster when the speaker acknowledged accomplishments and tears ran down their cheeks as the familiar names were called.

As dads, we will see our children accomplish many things. Our dream is that they fulfill their own potential and follow their own dreams.  That day for these young people, holding the words “Juris Doctor” in their hands was fulfillment of at least one of those dreams.    For dads, we simply hope  they will be happy, healthy and self-sustaining.

I believe our children hope that we will be there with them as they journey.  For those who need it, they wish for some motivation to encourage them to accomplish what they set out to do.  Some will hold on to the commitment that we will be there until the very end, no matter how long it takes.  Still others will cherish the comfort of the late night phone calls and seeing us as we sit quietly in the audience beaming with pride. Whatever it takes, dads need to be there.

Diplomas in hand, the graduates led us to a reception where cell phones captured pictures of every conceivable combination of the supporters.   On this warm May afternoon, thirsty folks stood in line for cookies and lemonade.   Among them was a well-dressed business man looking much like all the others, until one glanced down and spotted the sandals on his feet.   To borrow a phrase, some are born great dads, others have it thrust upon them.  But we all get to choose.  Years before this dad had the role thrust upon him and he chose to accept it.  One more diploma could have been awarded in the new family that day.  The second would have read “Be There Dad” with an inscription of  “Encouragement.  Commitment.  Presence.”