When You Don’t Know What to Say

There is an old story about a boy walking down the street who falls in a hole. 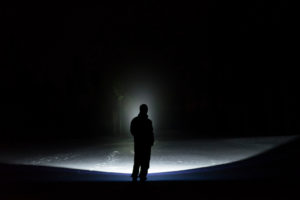 The hole is deep and dark, so the boy cannot find his way out. He sits and waits. After a while, a doctor walks by on the street above. The boy sees him and calls out, “Can you help me?” The physician responds in the way he has been trained to help. He writes a prescription and drops it down to the boy. He walks away. A while longer and a priest walks by. Again, the young man calls to summon his assistance. The priest acknowledges the situation and tries to help the boy in the way he has been trained. He writes out a prayer and drops it in the hole. He walks on.

I Know the Way

Shortly, the boy’s father walks by on the street. The son sees him and shouts, “Dad, can you help me?” Before he knows it, his father jumps down in the hole and stands in front of him. Frustrated and growing angry, the son says, “Dad, what are you doing? Now you are down in the hole with me?” Calmly, the father responds, “I know. But, you see, I have been here before and I know the way out.”

As dads we watch our children try to find their way out of holes – sometimes difficulties, mistakes and new challenges. Often they need us to get down in the hole, stand beside them and help them get out. Many times dads recognize that we have “been there before”, so in those cases, we can guide them from our experience. That is what dads do. We are confident he can help.

But there are other occasions when dads have not had a similar experience and they have not had the chance to find the way out. These may be the most worrisome to dads [and mentors] because although they want to be present, they simply do not know what to say.

In Be There Dad, I wrote about watching a movie called Spencer’s Mountain  with my dad the summer after I graduated from high school. Shortly thereafter, my parents delivered me to my dormitory when I was about to begin my freshman year in college. In a scene reminiscent of the movie; as they were about to depart for home, my dad shook my hand, looked me in the eye and said simply, “Give ‘em Hell.” That was the sum total of the advice he would give me about my upcoming journey through college.

An intelligent and successful businessman, my dad had received his GED while in the Navy but had not attended college himself. He had not attended college courses nor had all the experiences that come with living in a community on a college campus. Without that perspective, he gave me the best advice he could. “Give ‘em Hell.”  Imbedded in that short phrase was all that he had taught me up to that moment. All the lessons and values he had placed in my backpack over eighteen years were summed up in those words. I understood him to say, “I am proud of you, do your best and nothing less.”  No expectations on test scores. No expectations for my GPA. Just do your best. “You will know what that is. Don’t disappoint yourself. I will be proud of you”.

My dad did not know “the way out”, but he gave me the inspiration that carried me through the next four years. One expectation. One objective. Do your best. Whatever that may be for you. Eventually, with that encouragement and simple direction, I found my best to be graduation with honors.

Since that day, I have applied that advice over and over again. While in law school, in my marriage, raising my children and throughout my career. Simple but powerful. Do nothing less than your best. Don’t let yourself down. Dad will always have your back.

When I ask other dads, what was the most powerful advice they ever got from their own dad or mentor, they tell me similar stories. They say the encouragement that made a difference for them was not about metrics like getting certain grades, making the team, being cast in the lead role in the play, or getting into a certain college. Rather the words that made a difference resounded with doing their best, working hard, and persevering. Their dads did not focus on comparing themselves to others; but on making the comparison to their own best selves.

By focusing on the simple standards of working hard and pursuing their best, many students find the self-assurance they need to exceed their own expectations. Their test scores improve and their GPAs rise. Kids can learn to confidently plow through and accept whatever challenges may come before them, regardless of the specifics of classwork or tests. Remembering simply to “not disappoint themselves” can lead them to their purpose and potential.

The Song in Their Heart

As they grow, students learn that the content of their lessons like the Quadratic formula or Pythagorean theorem are mostly exercises to develop broader habits. Like drills in a football practice, many of those lessons are designed to make them stronger and more agile. They help prepare them to play the game. The real objective is to learn to think for yourself, work hard and persevere on life’s journey. When dads describe the most important lessons in their own backpacks, few of them have come from the questions on a written test. Mentors have placed them there.

When we help our children, sometimes we know the answers because we have been there before. Sometimes we do not. In either case, dads can be effective by just “being there”. Dads and mentors are those who encourage and then support them along the way. Their continuing presence helps them maintain focus on discipline and dedication to their own purpose.

A mentor can be someone who learns the song in their heart and can sing it back to them if they ever forget the words.

One More Step
October 13, 2022
Search BeThereDad.org
Most Recent News
Be There Dad Archives
Go to Top