My Dreams are Yours

The summer after my senior year in high school, like most teenagers I frequently stayed up late watching television. I had gotten into the habit of watching the late movie that aired just after the conclusion of the local eleven o’clock news. This was a time before cable or satellite TV, so I had only a few choices late at night. 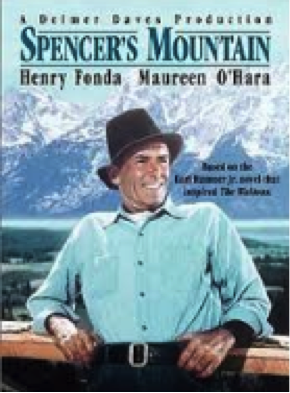 One evening, instead of retiring after the news, as he usually did, my dad hung around and watched the entire movie with me. The selection that night was entitled Spencer’s Mountain* starring Henry Fonda. Even though I enjoyed his company, I wasn’t sure why my dad stayed and watched that movie with me on that particular night. Perhaps he was a Henry Fonda fan. Perhaps he just wasn’t sleepy. Or, perhaps it was because he had seen the movie before, he knew how it ended, and he wanted to be with me when it did. As it turned out, I have been forever grateful for his choice. In the next two hours we made a memory that has lasted a lifetime for me.

Henry Fonda played a common guy who worked at the sawmill in a small town to support his large family of nine children. He worked hard just to keep food on the table, but at some point, he had inherited a piece of property on the top of a nearby mountain. It became his dream, almost his obsession, to build a dream house and give his family a better life on that property called Spencer’s Mountain.   While Henry [Clay in the film] is busy working to support his family and building that house in his spare time; his oldest son, Clay Boy is busy pursuing his own dream. With the guidance of a local school teacher and his own perseverance, the son becomes the first one in the family to be accepted into college.

The plot thickens as bad luck befalls the father. An injury at the mill leaves him unable to work, so saving any money for the son’s education becomes impossible. It appears that all the dreams of the father, the mountain house, the better life and even the education of the son, may fade away. But, then, [as we might expect from a Henry Fonda character] Clay displays his heroic character as only a father can. He makes a difficult choice. He gives up his dream, so his son might live his. He sells his beloved property on Spencer’s Mountain. With that money, he will be able to send his son to college.

While the father is disappointed, you can see immediately that his real dream was not on the mountain, but rather in giving his children a chance for a better life. In a scene full of love, he tells his wife [the lovely Maureen O’Hara] that he has given up his dream, so that Clay Boy can go off to college. With understated pride, he assures her that soon Clay Boy will return to help his next oldest sibling; then, one by one, each child will give the next the helping hand that their father gave the first. She hugs his neck, affirming what she knew all along.

In the final scene of the film, the entire family stands by Clay Boy as he prepares to board the bus and begin his historic journey. His brothers and sisters hug him and his mother cries just as all mothers do when they send their first one off to college. But in true Henry Fonda fashion, his father shakes his son’s hand, looks him in the eye and says simply, “give ‘em Hell”.

On that early summer morning in our family room, my dad and I watched the movie together, mostly in silence. I did not yet realize that we had shared a reflection of my own dad’s dreams. But, just a few weeks later, the significance of our time together became clear to me. My family took me to Purdue University to begin my freshman year. As they were about to leave me, we all stood by the car. My mom sobbed a bit – as all mothers do. But, just like Mr. Spencer, my father shook my hand, looked me in the eye and said simply, “Give ‘em Hell”.

No speeches. No other words of wisdom. That was it. The sum total of the advice I would get before I began what may have been the most important four years of my life. Give ‘em Hell. My father knew like Clay Spencer, that he had done all he could. The talks, the lessons, and the advice were behind us. He had said what he had wanted to say. He had been a role model for me to watch and learn. He had done his part. The implication was clear. Now, it was up to me. You know the way, now walk it. Do your best. Give ‘em Hell and I will always be proud. At last I recognized the lesson from that early summer morning.

These were the most powerful words ever spoken to me by the man who would become the inspiration for Be There Dad. For a man who had not lived his own dream of going to college, through hard work, had made it possible for me and my brothers to live ours. My dad and I had done more than just spend time together all those years. We had more than history together. We had a relationship. We understood each other. He knew me and I knew him. So, a short and simple reminder said it all. As dads, we will eventually send our sons and daughters off to college and other places where their dreams are waiting.   When that time comes, we realize that there is no more we can do. There is no more we can say. We have taught them the lessons along the way.

We give up our time, our money and, sometimes, even our dreams to help our children live theirs. Some times we give our time to watch a movie, make a memory and teach a lesson. Sometimes we give up a mountain. I think that is what Be There Dads are meant to do.